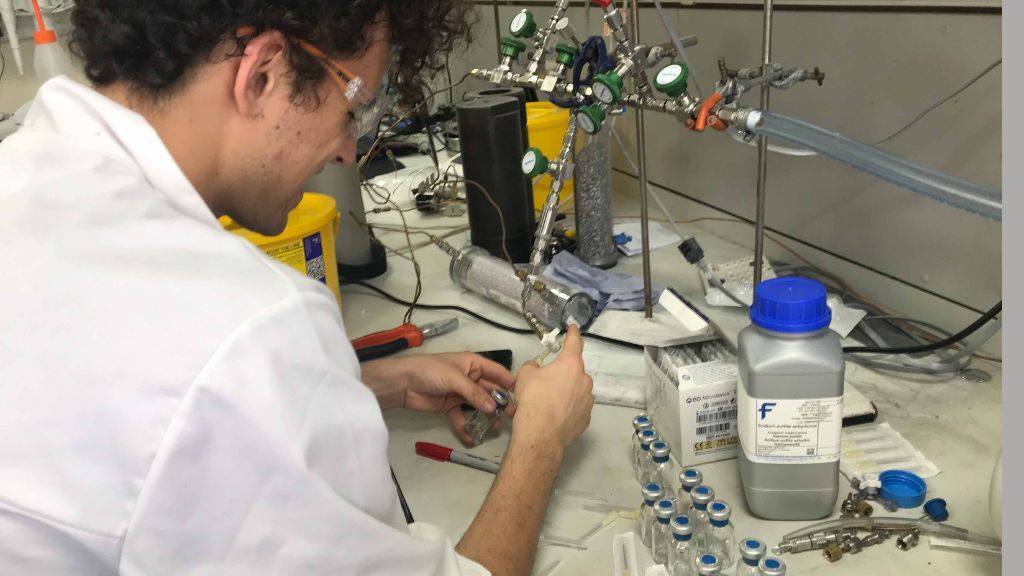 Powerful earthquakes that shook Earth some 3.8 billion years ago split open the planet’s crust and allowed chemical reactions to unfold deep within the fractured rock. These reactions, fueled by seismic activity, water and near-boiling temperatures, may have provided oxygen to some of the world’s earliest life forms, a new study suggests.

This oxygen would have come packaged in the compound hydrogen peroxide (H2O2), which contains two hydrogen atoms and two oxygen atoms bound together, according to the study, published Monday (Aug. 8) in the journal Nature Communications (opens in new tab). Perhaps best known as an antiseptic, hydrogen peroxide can, of course, be toxic to living organisms, but it can still be a useful oxygen source once broken down by enzymes or by reactions that occur under high heat, Jon Telling, the study’s senior author and a senior lecturer in geochemistry and geomicrobiology at Newcastle University in the U.K., told Live Science.

Now, in laboratory experiments, Telling and his colleagues have uncovered a way that ample amounts of hydrogen peroxide may have formed on early Earth and thus served as a potential oxygen source for some of the planet’s earliest organisms. These reactions occur most efficiently at temperatures near the boiling point of water — 212 degrees Fahrenheit, or 100 degrees Celsius — but still produce a little H2O2 at temperatures below 176 F (80 C), the researchers found.

Notably, these temperatures overlap with the temperature range that thermophiles and hyperthermophiles — meaning heat-loving bacteria and archaea — are known to thrive in, Telling said. It’s thought that the common ancestor of all life on Earth also evolved to live in scorching hot environments, and so in theory, this mysterious ancestral organism may have been influenced by the presence of hydrogen peroxide forged deep in the planet’s crust.

Related: Earth nearly lost all its oxygen 2.3 billion years ago

And importantly, because hydrogen peroxide can damage the fats, proteins and DNA of cells, early organisms would have needed strategies to “detoxify” the compound if it was present in their environment, said Lynn Rothschild, a senior research scientist at the NASA Ames Research Center in California, who was not involved in the new study. Hydrogen peroxide is also a natural byproduct of photosynthesis, so to evolve the ability to photosynthesize, organisms likely needed to be able to deal with H2O2, first.

“There had to be sources of reactive oxygen species” — including hydrogen peroxide — “on early Earth before the advent of oxygenic photosynthesis,” Rothschild told Live Science.

Deep inside the crust

Some of these experiments involved pulverizing rocks under specific conditions and then exposing those crushed rocks to water. This series of events mimics, on a small scale, the physical stress rocks endured in tectonically active regions of early Earth’s crust, where the crust cracked open and water could then seep inside. When Earth was less than a billion years old, the planet did not yet have large slabs of crust sliding over its mantle, as tectonic plates move across the world today, Telling said. However, at that time, the crust still buckled and cracked in localized regions due to volcanic activity and interactions between far smaller chunks of crust, he said.

In their rock-crushing experiments, the team used granite, a rock found in continental crust, and basalt and peridotite, which would have been abundant in early Earth’s oceanic crust. They ground these rocks to fine powder in oxygen-free containers, carefully transferred the crushed rock to airtight bottles, added water and then cranked up the heat.

As the rock powders reached near-boiling temperatures, “defects” within their component minerals grew less stable and more likely to react with water. Specifically, these defects included “peroxy linkages,” or places where two oxygen atoms are bound together within the minerals’ crystal structure, where usually oxygen would only bind to the element silicon. Such defects can be introduced into a crystal if water is inadvertently added to its structure as it forms, Telling said.

“When these rocks containing these peroxy linkages are put under stress, these defects can actually kind of dislocate,” he explained. “They can move through the crystal structure to the surfaces where they can then start to interact with water,” and this interaction ultimately makes hydrogen peroxide.

These results suggest that, at least in regions of early Earth rocked by quakes and baked at high temperatures, hydrogen peroxide may have been a common feature of the environment. That said, the experiments can’t capture the exact rate or scale at which these H2O2-producing reactions took place on early Earth, Telling noted.

“It would be interesting to see how widespread this phenomenon is” and how hydrogen peroxide influenced the evolution of early organisms, on a global scale, said Rothschild, who studies how life may have originated and evolved on early Earth and potentially elsewhere in the galaxy. That said, H2O2 wouldn’t have needed to be present in all environments on early Earth to hold sway over the evolution of life on the planet. If you’re a tiny microbe that measures mere microns across, you’re only influenced by the chemicals in your immediate surroundings, anyway.

“Honestly, it’s good enough if you have reactive oxygen species in your neighborhood,” Rothschild said. This early exposure to environmental H2O2 may have provided essential “training” for the organisms that evolved into cyanobacteria, the blue-green algae responsible for pumping Earth’s atmosphere full of oxygen and thus shaping the course of our planet’s history, she said.